Each year, tens of thousands of patients in the U.S. are diagnosed with aneurysms – weak spots or bubbles in their arteries. One effective treatment is the placement of a stent graft, which is a tube surrounded by a fabric liner that reinforces the weak spots.

In the past, surgery was often needed to place the stent graph. More recently, physicians have been using a minimally invasive procedure called endovascular grafting, which uses a catheter in the stent placement process. However, this procedure brings with it a slightly higher risk of complications that involve leaks from the graft into the interior of the aneurysm.

Main Street Radiology uses an advanced imaging technique known as CT angiography to identify the leaks so that appropriate treatment can take place.

Case History: A 74-year-old man who had previously had a a stent graft placed to repair an abdominal aortic aneurysm was referred to Main Street Radiology for CT angiography for a routine follow-up evaluation. 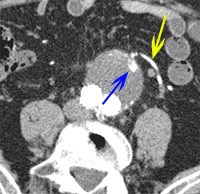 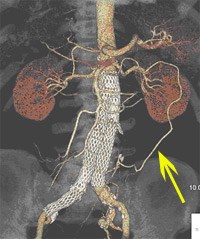 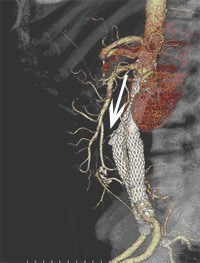 Findings:On the axial image (Figure 1), contrast opacification of a patent inferior mesenteric artery (IMA) is seen (yellow arrow) with contrast within the lumen of the aneurysm (red arrow) indicating an "endoleak." Normal opacification of the stent graft (small arrows) is noted.

Discussion: Endovascular repair of abdominal aortic aneurysm has been accepted as an effective alternative to open surgical repair, with decreased operative mortality and serious complications (New England Journal of Medicine, 2004; 351:1607-18). However, with minimally invasive placement of aortic stent grafts, there is a slightly higher rate of local vascular complications compared to open surgery (Radiology 2002; 224:739-747), due to leaks from the stent graft into the lumen of the aneurysm ('endoleak"). CT angiography has been shown to be the most sensitive test in detecting endoleaks.

Type I endoleak is found during the placement of the stent-graft, and should be corrected before the patient leaves the operating/procedure room.

Type II endoleak is most common, and typically involves retrograde flow into the aneurysm sac via a patent IMA or lumbar artery. A type II endoleak may not prove to be clinically significant. Follow-up CT angiography should be performed to assess the presence of the leak as well as measure the outer diameter of the aneurysm. Intervention should be considered if the aneurysm increases in size. Thrombosis of the involved vessel can be obtained percutaneously by an interventional radiologist.

Type III endoleak needs to be corrected, usually in the interventional radiology suite.

At Main Street Radiology, we routinely perform CT angiography of the abdominal aorta. Both 3D and multiplanar 2D images are generated, which guide the vascular surgeon and interventional radiologist in planning the appropriate treatment. When performing follow-up studies after stent graft placement, we also perform "delayed" images which have shown to increase the sensitivity in detecting endoleaks.