Images capture details that may otherwise be missed

When diagnosing diseases and other potential problems inside the body, and deciding on the proper treatment course, it's helpful for physicians to have as many viewpoints as possible. In short, some anatomical conditions simply aren't visible from certain angles.

Traditional CT scans capture images from a limited number of perspectives. However, Main Street Radiology uses advanced CT technology that provides images along a number of different planes. This multiplanar CT is routinely performed in the head and neck region, including the soft tissues of the neck, temporal bones in the skull, and sinuses. Multiplanar imaging is also utilized in many other areas, including the liver, kidneys, pancreas, and extremities.

History: A 62-year-male with goiter – an enlargement of the thyroid – came to Main Street Radiology for a pre-operative evaluation.

Technique: Multiplanar CT of the neck was performed on a 16-detector spiral CT during the dynamic injection intravenous contrast. Images were obtained with 0.75 mm collimation (slices) with reconstruction of 2D and 3D images in multiple planes. 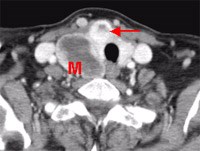 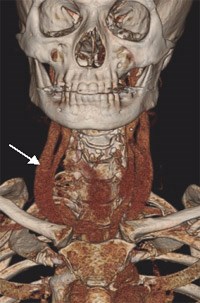 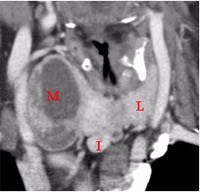 Discussion: Neck CT's at Main Street Radiology are performed with sub-millimeter slices, enabling mutiplanar 2D and 3D reconstructions. Due to the thin slices, nearly "isotropic" volume acquisition is obtained, which enable high-resolution images to be generated in any plane. Multiplanar imaging can be helpful in defining anatomy, especially for surgical planning. This includes high-resolution imaging of the laryngeal cartilage (yellow arrows on Figure 2) which was previously not possible with routine CT exams.