For years, medical experts recommended that most people get a colonoscopy when they turned 50. But the American Cancer Society has dropped that age to 45, and with good reason: Colorectal cancer is the third most common cause of cancer-related death in the U.S. However, if detected early through a colonoscopy or other means, the survival rate for patients is 90%.

The challenge is top get people to schedule a traditional colonoscopy, which includes an uncomfortable bowel-emptying process before the procedure. In other cases, people willing to undergo the traditional procedure cannot do so because the camera-carrying colonoscope, which has the thickness of a pen, cannot be inserted into their colon due to a blockage or some other reason.

The alternative is a virtual colonoscopy, also known as CT colonography. Main Street Radiology has been performing these non-invasive imaging tests for several years now, and studies indicate they can be just as accurate as traditional colonoscopies in locating both tumors and pre-cancerous polyps.

Case History: A 77-year-old female underwent conventional screening colonoscopy. The gastroenterologist could not pass the colonoscope beyond the descending colon. The patient was referred to Main Street Radiology for a virtual colonoscopy (CT colonography).

Findings: A 2 cm pedunculated polyp was identified within the ascending colon on virtual colonoscopy (Figures 1 and 2). On the routine axial image (Figure 3), the polyp (red arrow) is of similar density as the mesenteric fat (white arrows), compatible with a lipoma. 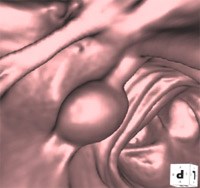 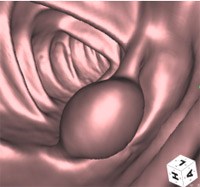 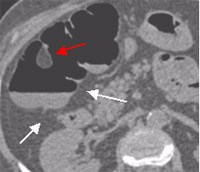 Colonic lipomas usually do not cause symptoms. Rarely, patients may present with abdominal pain secondary to intussusception. Ulceration of a lipoma may occasionally cause bleeding.

Traditionally, definitive diagnosis was made with resectional biopsy. Higher incidence of bowel perforation has been reported with biopsy of colonic lipomas, due to their intramural location. Definitive diagnosis can be made on CT colonography, negating the need for biopsy.

A major advantage of CT colonography is that it is non-invasive. It has been especially beneficial after a failed or incomplete conventional (optical) colonoscopy.

With our 16-detector CT, Main Street Radiology is now performing virtual colonoscopy with 0.75 mm slices, with resolution higher than obtained by the New England Journal of Medicine authors. We also utilize 3D "fly-through" software. With these new techniques, virtual colonoscopy may become a viable alternative to conventional colonoscopy, at lower cost and morbidity.