Urinary tract conditions can be both painful and a threat to long-term health. To diagnose them and to plan further treatment, doctors often need to examine the kidneys, bladder, the ureter ducts that connect those organs, and blood vessels in that part of the body.

Traditionally, this has often involved a test called catheter arteriography. A plastic catheter is threaded into an artery, a contrast material is injected through the tube, and images are captured using X-rays.

At Main Street Radiology, we often use a less invasive method. Magnetic resonance urography (MRU) uses MRI equipment and a contrast dye to create detailed images of the urinary tract. To the best of our knowledge, we are  the only facility in Queens performing MR urography. Superior equipment and highly-trained personnel enable us to perform procedures that are traditionally available only at major academic-affiliated facilities.

Case History: Ultrasound and CT exams on a 60-year-old female with left flank pain revealed moderate left hydronephrosis without calculus. A left-side retrograde pyelogram was performed by a urologist (Figure 1), which revealed moderate hydronephrosis and normal caliber left ureter, compatible with ureteropelvic junction (UPJ) obstruction. The patient was then referred to Main Street Radiology for magnetic resonance angiogram (MRA) of the renal arteries as well as an MR urogram. 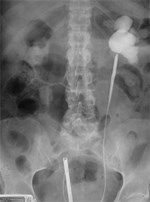 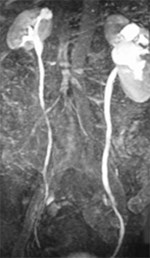 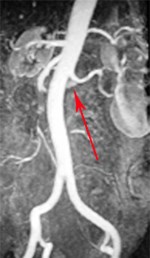 Findings: On the MR urographic image (Figure 2), findings of left UPJ obstruction are visualized. Incidental note of a small and scarred right kidney is made. An oblique image from the MRA (Figure 3) demonstrates early branching of the main renal artery with the inferior branch (arrow) crossing the expected location of the obstruction.

Discussion: There are numerous causes of UPJ obstruction, including calculus, tumor, crossing vessel, and congenital/inflammatory stricture. When calculus and tumor are excluded with CT and retrograde pyelogram, and corrective surgical procedure is planned, the presence of a crossing vessel should be determined prior to intervention. Traditionally, conventional catheter arteriography was performed; however, with the advent of gadolinium-enhanced MRA, vascular anatomy can be imaged without performing an invasive procedure. An excretory MR urogram can be obtained on the same scan, which is analogous to a conventional IVP, providing anatomical correlation with the urinary tract.

In studying the urinary tract, MR urography has been utilized as an alternative to conventional IVP for patients who cannot receive iodinated contrast due to allergy or renal insufficiency. Non-nephrotoxic gadolinium is used for MR urography. The accuracy in detecting the site of obstruction has been reported to be greater than 99%.