A special MRI technique giving us important information about the brain and many other organs.

Reduced blood flow to the brain, the heart, and other parts of the body is known as ischemia. The condition can lead to strokes, heart attacks and other serious conditions.

The most sensitive way to diagnose cerebral ischemia is with diffusion weighted imaging, or DWI. The technique uses certain properties of water molecule movement to produce enhanced, high-contrast MRI images. It can also be used in the diagnosis of tumors, cysts and other cerebral problems.

DWI is available at Main Street Radiology, utilizing our high-field magnet and high-performance gradients. When ordering a brain MRI, a referring physician can request a DWI at no extra charge. It  adds only a few minutes to the exam.

Case History: An 80-year-old female experienced a sudden loss of vision in her left eye. She was referred to Main Street Radiology for brain MRI with diffusion imaging. 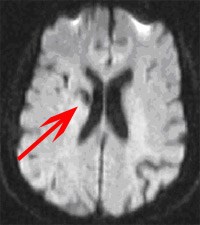 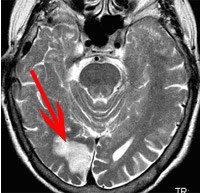 Discussion: Diffusion is the term used to describe the random, Brownian motion of water molecules. In diffusion-weighted imaging (DWI), MR images made sensitive to the diffusion properties of water molecules are generated. This requires high-performance magnetic gradients and was introduced into clinical practice in the mid 1990's. Diffusion-weighted MRI provides image contrast that is different from that provided by conventional MR techniques. Application of diffusion imaging has been found in ischemia, tumors, infection and white matter disorders.

The most important and widely used clinical application of DWI is in the evaluation of ischemia. DWI is the most sensitive method for detection of acute ischemia, allows distinction of old versus new infarct, and helps distinguish acute ischemia from other processes with a similar conventional MR imaging appearance.

DWI in conjunction with perfusion imaging can also be used to determine viable ischemic tissue versus non-viable infarcted tissue. On DWI, an infarct can be detected within minutes of onset of clinical symptoms, several hours before conventional MR imaging. The diffusion properties of infarcted tissue follow a predictable course- they are virtually always abnormal in the first 24 hours and virtually always normal 2 weeks later.

Restricted diffusion can be seen in processes other than acute ischemia. Brain abscesses have been shown to have restricted diffusion possibly secondary to the viscosity of pus. DWI can also be used to differentiate arachnoid cysts from epidermoid cysts. Cytotoxic edema (e.g. ischemia) can be easily distinguished from vasogenic edema ( e.g. posterior reversible encephalopathy syndrome). Increased diffusion is also seen in acute demyelinating plaques. Diffusion tensor imaging is currently being developed to study white matter tracts and shows great promise.