PET Scans Can Identify Cancer Indicators Other Exams May Miss

For patients with breast cancer, identifying the stage of the disease is critical to determining the proper course of treatment. CT and bone scans have long been the primary diagnostic tools, but both have limitations. Studies indicate that PET scans, which use radioactive dye to produce detailed images,  can locate signs of disease in smaller lymph nodes and bone marrow that the other tests may miss.

The bottom line is that combining - or fusing - CT and PET images gives physicians the best chance to accurately diagnose breast cancer staging. And unlike many facilities in which PET scans are interpreted by nuclear medicine physicians without general radiology training, Main Street Radiology PET scans are interpreted by physicians certified by both the American Board of Radiology as well as the American Board of Nuclear medicine.

Case History : A patient with carcinoma of the right breast was referred to Main Street Radiology for staging. 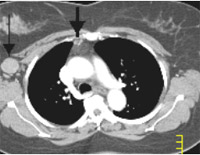 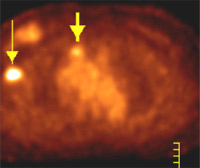 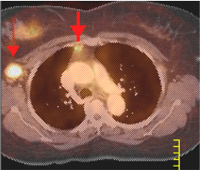 Discussion: Traditional staging of breast cancer has often included CT scans of the chest, abdomen and pelvis, a bone scan, and a sentinel node biopsy. CT and bone scans, however, do have limitations.

Lymph nodes are commonly seen on CT. Thus, the suspicion for tumor involvement is usually only raised on CT when these nodes are enlarged (typically at least one cm). Raising suspicion in smaller lymph nodes on CT, while increasing sensitivity, would lead to an unacceptable specificity for malignancy. With higher specificity, however, PET scanning can demonstrate malignancy in these smaller nodes [5-10 mm], as seen in this case in a right internal mammary lymph node.

Bone scans are, in actuality, "calcium scans." The radioactive tracer used in bones scans localizes to calcium, which is typically laid down in greater abundance in the bone cortex adjacent to sites of metastatic disease in the bone marrow. However, bone scans have difficulty detecting sites of metastatic disease that are solely in the bone marrow and do not induce a significant reaction. PET scans have been shown to be more sensitive for these lesions. Several reports have noted that PET scans may be less sensitive for blastic lesions compared to bone scans, and thus these two studies are currently seen as complementary.

Thus, PET scanning improves the diagnostic accuracy of the staging of breast cancer, mostly through its detection of distal disease. Sentinel node biopsy is still the best method to stage the axilla.

A survey of 50 referring physicians at UCLA revealed that PET imaging altered breast cancer patient management by changing the clinical stage in 36% of patients, usually by upstaging [Journal of Nuclear Medicine; 2001 Sep;42:1334-7].