The pancreas and bile duct systems play an important role in digestion. When they narrow or become blocked, patients can experience severe upper abdominal pain and other symptoms.

Abdominal ultrasounds are often used to produce pictures of the gallbladder and bile ducts. But Main Street Radiology has found that magnetic resonance cholangiopancreatography (MRCP) is also an excellent diagnostic tool. In just a few seconds, it provides 3D images of the bile ducts and pancreatic duct and can help detect - or rule out - gallstones, tumors and other conditions.

These tests can also provide detailed images of the pancreas, gallbladder and liver, and help to diagnose liver disease and pancreatitis.

Case History: A 45-year-old female had a history of biliary colic. Ultrasound showed gallstones and possible common bile duct stone. The patient was referred to Main Street Radiology for an MRCP - MR cholangiopacreatography. 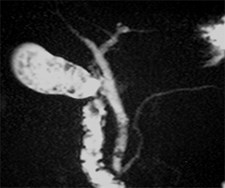 Discussion: Ultrasound is highly sensitive for the diagnosis of bile duct dilatation, but insensitive for detection of common bile duct stones, with sensitivities reported to be as low as 20%. In pre-operative cholecystectomy patients, presence of bile duct dilatation on ultrasound or abnormal liver function tests was associated with 98% sensitivity for choledocholithiasis but only 34% specificity (Radiology 2001; 220:677-682), potentially leading to unnecessary ERCP or intra-operative cholangiograms. Other studies have concluded that up to 25% of acute cholecystitis patients have choledocholithiasis, and as many as 15% of these cases were unsuspected pre-operatively.

MRCP has become a powerful non-invasive tool in the diagnosis of common bile duct stones. Numerous published studies report sensitivity and specificity between 80% and 100%. MRCP should be considered in the preo-operative work-up for cholecystectomy, especially in patients with clinical or ultrasound findings suggestive of choledocholithiasis.

Indications for the performance of MRCP are growing. Currently, MRCP is performed most frequently to exclude common bile duct stones, primary sclerosing cholangitis and congenital bile or pancreatic ductal anomalies. MRCP is equally effective at diagnosing choledocholithiasis pre-operatively, as well as following cholecystectomy.

High-quality MRCP images are generated using "single-shot-fast-spin-echo" technology, where three-dimensional images of bile and pancreatic ducts can be obtained in less than two seconds, without prior administration of intravenous or oral contrast. This technology is only available on high-field magnets with advanced software.