Advanced MRI Tools With Many Applications in Brain Imaging

Diagnosing tumors and other brain diseases and conditions can be a complex undertaking. The best path to an accurate diagnosis is often a combination of magnetic resonance (MR) tests that measure blood flow in the brain and the metabolizing of certain substances found in brain tissue.

These advances tests are known as MR perfusion and spectroscopy, and they are available at Main Street Radiology after having been pioneered at research institutions across the United States. These advanced techniques can be added to a routine brain MRI with contrast at no additional charge.

Case History: A 50-year-old woman with progressive dizziness was referred to Main Street Radiology for a routine pre- and post-contrast brain testing with magnetic resonance technology. 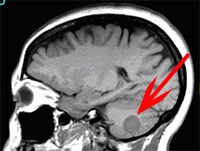 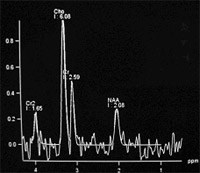 Findings: A non-enhancing, well-circumscribed, left cerebellar hemispheric lesion was identified (Figures 1-3). The differential diagnosis included neoplasm as well non-neoplastic entities such as demyelinating plaque, unusual infarct, or cyst. As the findings were atypical, the patient was recalled for further evaluation with MR perfusion and MR spectroscopy.

Discussion: MR perfusion utilizes a dynamic injection of a standard dose of gadolinium-based contrast. Rapid "echo-planar" images are then acquired during the first pass of the injection, allowing for real-time observation of tissue perfusion. This is in contradistinction to standard contrast- enhanced images which acquire data minutes after a bolus injection of gadolinium. MR perfusion techniques thus measure physiologic characteristics of tissue, while standard contrast MR is dependent on blood-brain barrier breakdown.

MR spectroscopy, similar to NMR (nuclear magnetic resonance) technology used in chemistry labs, enables separation of metabolite peaks within a tissue sample. In brain, the important metabolites measured are choline, creatine, and N-acetylaspartate. Measurement of these metabolites has a wide variety of applications in brain imaging, and may be helpful in evaluation of neoplasms, as well as epilepsy, demyelinating disease, and infections, as well as a variety of other disorders.